Britain joined the Second World War on September 5, 1939 - 2 days after Germany invaded Poland. The news of this escalating war 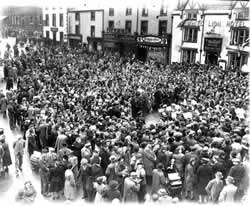 would immediately and permanently change many peoples lives. On 27th April 1939, Parliament had already passed the Military Training Act. This introduced conscription for men aged 20 and 21, who were now required to undertake six months' full-time military training, with conscription for ages 20-40 being introduced not long after.

The Lancashire Fusiliers raised seventeen battalions for service in the Second World War. During the Battle of France, the 1/8 Battalion, 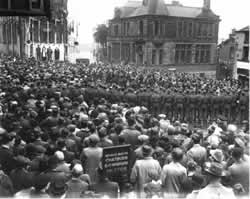 Lancashire Fusiliers, along with battalions of the Royal Norfolks and the Royal Scots, were overrun on 26-27 May 1940 around the village of Locon, 2 kilometres north of Bethune by advancing German troops. Several massacres of Allied prisoners took place shortly thereafter, primarily by the German SS Totenkopf Division.

The marriage of Miss Margaret Birtwistle, daughter of Mr. and Mrs H.H. Birtwistle of Acrefield, Whalley, to Lieutenant C. Bishop will take place at Whalley Parish Church on November 12. Miss Birtwistle, a member of the Women's Transport Service (F.A.N.Y.) for the past two years, has been driving a military ambulance since the outbreak of the war. Her fiance, formerly a language master at Sedbergh School, is now a serving with the Border Regiment.

Salmesbury is situated off the A59 between Clitheroe and Preston. It is now part of BAE Systems. Salmesbury Airfield was built on farm land in the late thirties as a joint civil airport, the result of a partnership between the then Blackburn and Preston Authorities. Prior to the War the airfield was requisitioned by the Government to build Handley Page Hampden's (Bombers) by English Electric. An initial hanger was built for this purpose in 1939.

During February 1940 the first plane went through its first test flight. A total of 770 Hampdon's were built at Salmesbury. By May 1940 additional hangers had been built and the runway extended in preperation for the Handley Page Halifax, the first one of which flew in August 1941. A total of 2,145 Halifax Bombers were built. Salmesbury was also used by Number 9 Group Communications Flight with its mixture of Hurricanes -Masters and Oxfords. We have information of a Squadron Leader Denys. E. Gillam AFC, DSO, DFC being in charge during most of the 1941 period of operations. The HQ of Number 9 Group was only 6 miles away at Barton Hall, near Preston. 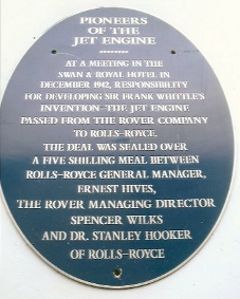 Hailed as the Father of Jet propulsion. Accreditted with the jet engine in 1932. Born Earlsdon, Coventry. Son of a mechanic. Entered the RAF as an apprentice Aircraftsman. Described by his senior officer as a mathematical genius. Promoted from the ranks to go to Officers Training College in Cranwell, Lincolnshire. Frank Whittle was interested in high speed flight at high altitude and speeds over 500 mph/800 km (h) from an early age. He continually worked on his jet engine principle. In 1941 Rover set up a new laboratory for Whittle and his team at Barnoldswick in addition to a similar operation at the Waterloo Mill, Clitheroe during the War period.

We do hope to obtain information from the North West Sound Archives relating to some of the workers who were involved in the making of the Jet Engine in Clitheroe.

For those who wish to know more about Sir Frank Whittle do please go onto the following suggested sites although there are a number more.

"If you went round any town or village in Great Britain you would find worse examples", said Robert Cornthwaite, when charged before the County Justices, at King Street on Monday, with a breach of the black-out regulations at the Shireburn Arms, Hurst Green. P.S.Smith, on duty in Clitheroe Road at 11.20pm on the night of Monday, September 9, in company with P.W.R. Sagar, stated that light was showing from six windows of the hotel, one -a pantry window-being apparently unscreened. In the other cases, light was showing at the edges of the blinds. When the offence was pointed out to him, the defendent replied "Each window is fitted with a curtain and blind".

In answer to Superintendent Kay, P.W.R Sagar said the lights were noticeable from about forty yards distant. Defendent told the court that the windows were fitted with curtains and blinds, and that he want round the premises at 9 o'clock the same night and could see nothing amiss. The pantry window was covered with corrugated zinc, and there was also a meat safe in front of it so it was not possible to see any light.

For a similar offence, Eric H. Viles, "Blantyre", Abbey Road, Whalley, was also fined 15s. In a letter to the Bench, he stated that, going home early, he blacked the premises out but over looked the curtain which shielded a glass panel in the door.

We wonder why only 10s for the Shireburn Arms offence?

We know this was the village of Chatburn and this was the article following on from the lengthy report on those civilians killed from there.

Among the debris by the roadside in a North West village sadly devasted by an enemy raider's high explosive bombs, was a large sized - bible. The volume, mud-stained and its backs mutilated, was doubled at the book of the prophet Jeremiah. Picked up by a visitor, this was the first verse at the top of the page (chapter v1., 5) that caught his eye: "Arise and let us go by night, and let us destroy her palaces."

More power to the R.A.F elbow.