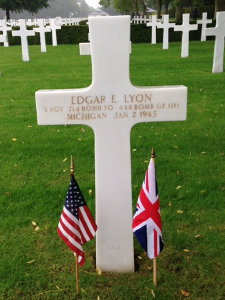 Further information was received, shown below, from a relative Duane Lyon. 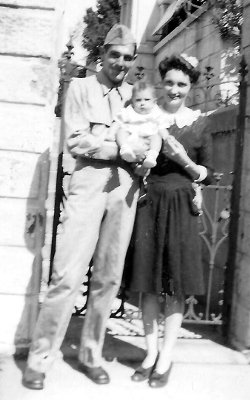 Edgar was drafted into the Army and began his military service on 26 May 1942. At the time of his death, he was a Staff Sergeant in England assigned to the 714th bomber Squadron, 448th Bomber Group, working on B-24 heavy bombers. His unit had been activated in mid-1943, and was then deployed to England to participate in the air offensive over Nazi Germany and Occupied Europe until Germany surrendered in May 1945.
Edgar's specific task was to maintain and repair bomber instrumentation. During and after high school, Edgar had worked in a jewelry store and was learning watch repair. These talents were apparently put to use, Edgar used these skills to maintain the delicate instrumentation on the B-24 bombers- which to the uninitiated seems like a hundred watches stuffed in the cockpit.

Edgar died on 2 Jan. 1945 over the Ribble Valley in Lancashire when the B-24 he was a passenger on lost its way in the fog and crashed into the side of a hill, slid to the top and hit a massive stone wall. He is buried in the Cambridge American Cemetery and Memorial (also known as Madingley American Cemetery) in Plot F, Row 6, grave 140. This site is the only permanent American World War II military cemetery in England. He is buried with 3812 other American servicemen and women, most of whom were crew members of British-based American Aircraft.