Martha has kindly sent us a photograph and an article 'Memories of Staff Sergeant Edgar E.Lyon' now added to his Casualty Page.

Members of the Clitheroe Youth Forum were presented today 24th November 2015 at the Lowry Theatre with a Diana Award for their WW2 Forest of Bowland project. 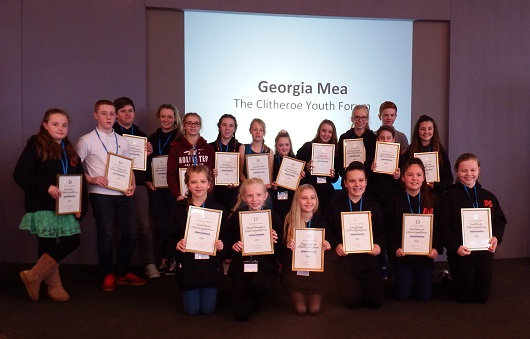 American relatives - Duane and Diana Lyon visit Cambridge Cemetery to pay their respects to Airmen Lyon after being part of our Memorial unveiling.

Greetings from American soil in England. Cambridge Univerisity donated this land for the cemetery. The museum was very interesting & the chapel was beautiful. 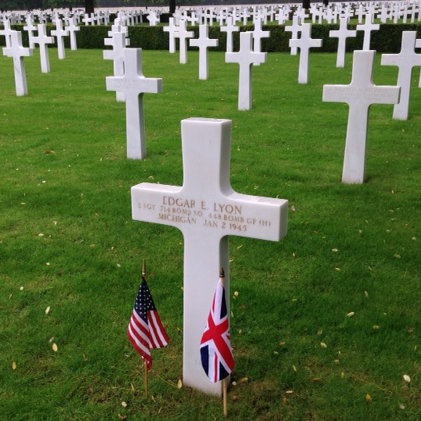 We thank them for their photographs of which further ones appear on the casualties page of Edgar E Lyon, the casualities page of J R Runnels and also on Clitheroe Youth Forum site.

Remembrance Service in the Trough of Bowland attended by family relatives from America, Australia and New Zealand.

The road through the Trough of Bowland at Sykes Green fell silent on Saturday 19th September as the Clitheroe Youth Forum, under the leadership of Mel Diack MBE concluded their ‘We shall remember them’ project with a final Act of Remembrance for the 25 airmen killed in crashes in the Ribble Valley and Trough of Bowland during WWII and the Berlin airlift of 1949.

This comprehensive project researched these accidents uncovering details of some of the airmen who lost their lives, airmen from Australia, New Zealand, the USA, Canada, Poland and Great Britain. Last letters home and photographs have surfaced giving an insight into the lives of those airmen who gave their lives in the service of their countries. Relatives of those who died have also been identified through social media and Service Organisations.

The Service opened with a Parade of Standards and young people led by the Piper Michael Lonsdale. The Service was led by the Venerable Michael Everitt, Archdeacon of Lancaster supported by Monsignor J Corcoran and Father J Chaloner from St Hubert’s RC Church in Dunsop Bridge. The Service was attended by family relatives Diana and Duane Lyon from America who were related to the late Staff Sergeant Edgar Lyon aged 25 who was aboard a Liberator B24 which crashed on Burn Fell on 2/1/1945, Marion Wheldon from Australia related to the late Pilot John Goulter aged 22 who was flying a Boulton Paul Defiant which crashed near Gisburn 24/10/1942 and Kathleen Jamieson from New Zealand who was related to the late Pilot John Gilmer (aged 23) who crashed between Burn Fell and Dunsop Fell on 2/5/1940 flying an Armstrong Whitworth Whitley.

Peter Robinson OBE concluded the Service by saying that in the 30 years he has lived in Lancashire this has been the most special day and thanked Mel Diack MBE for his courageous leadership of the Clitheroe Youth Forum in this Remembrance project; the something special about the ‘We shall remember them’ project is that it has been conducted by young people who will remember their involvement and carry Remembrance on to the next generation.

Following the Service all present returned to the Dunsop Bridge Village Hall to see a film made by the Ribble Valley Moviemakers. This film recorded the history of the accidents, those who lost their lives, reflections from local people who witnessed one of the crashes and all of the events leading up to today’s Service.

‘We shall remember them’ has been funded by the Heritage Lottery Fund and the Clitheroe Youth Forum wishes to thank all of those who have supported the Project without whose help this Commemoration of lives lost during World War II and the Berlin Airlift of 1949 would not have been possible. 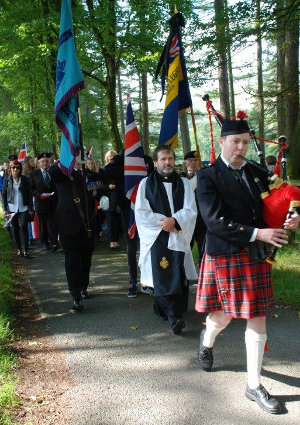 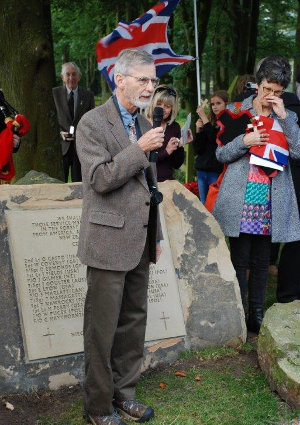 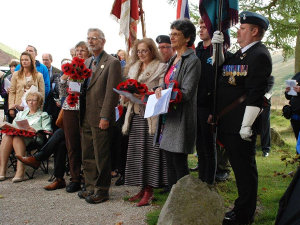 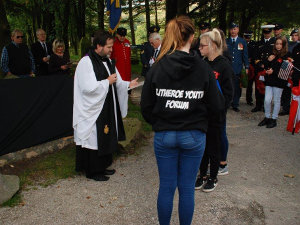 Relatives of the pilots prepare to place wreaths 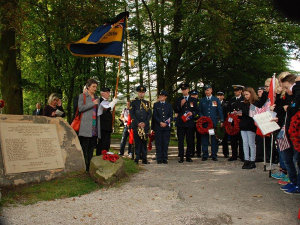 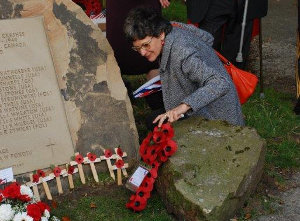 Photo's and information received from our American friends and relatives of the late Airman Lyon.

What an incredible day this was. It started with a light lunch & then off to the site for the dedication of the boulder. A parade lead by a bag piper, then the arch bishop & two clergy plus dignitaries including 2 baronesses & a member of parliament, the military, & the Clitheroe Youth Forum came up the walking path by the Ribble River.

There was a long ceremony highlighted for us by the dedication of the books of remembrance written in calligraphy & in Braille & the poems written by the youth. Then Duane, a family member from New Zealand & one from Australia unveiled the boulder engraved with the names of 25 airman who died in crashes in Bowland Forest during WWII & the Berlin Airlift.

Tomorrow we get to tour the individual markers by the crash sites & see more of this beautiful country. 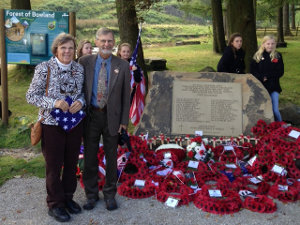 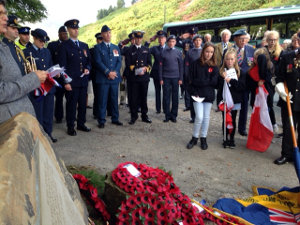 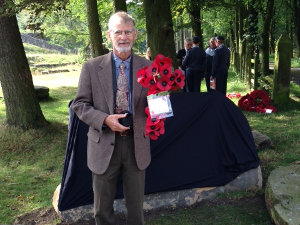 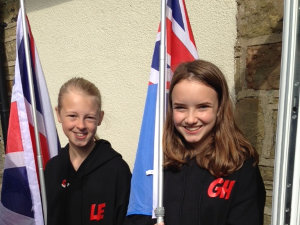 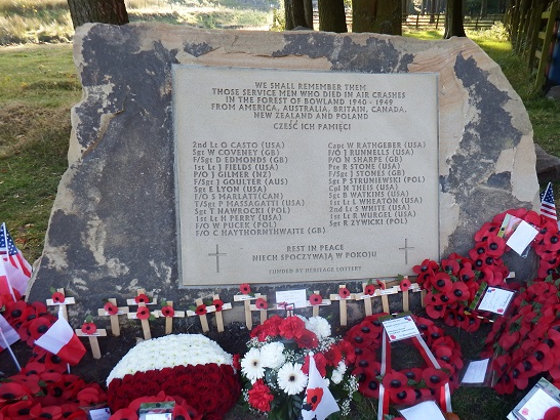 On Saturday 19th September 2015 the Clitheroe Youth Forum held their Memorial unveiling at Sykes Green, Langden Brook near the village of Dunsop in the heart of the Trough of Bowland, Lancashire for the 25 Airmen who lost their lives in 15 separate plane crashes during World War Two and the early part of the Berlin Air Lift.
The Memorial boulder was unveiled by family members from New Zealand, Australia and America who lost loved ones in these crashes namely Pilot Goulter, (Australian) Pilot Gilmer (New Zealand) and Lyon (American).
The Deputy Lieutenant of Lancashire Peter Robinson OBE was senior guest along with Nigel Evans MP for the Ribble Valley and the Mayor of the Ribble Valley Councillor Bridget Hilton. Officers of the various countries involved were present along with Embassy officials, numerous organisations, local residents and our Polish friends attending from Preston and Southport. A senior official from the Heritage Lottery was also present. Our service was announced on BBC Radio Lancashire in the morning which was brilliant..
The service was conducted by Arch Deacon Michael from Lancaster and supported by two Catholic Priests from Dunsop and Clitheroe. Standard bearers were on duty from the Royal British Legion and RAFA. Michael Lonsdale our piper played at various stages of the service and led the parade along with the Standard Bearers. Poems, words and music were all part of the service.
Wreaths were laid along with individual names for the Airmen on small crosses. We must also thank Denis Shiels a Chelsea Pensioner for travelling all that way to be with us and of course Ted Davidson our WW2 Veteran. A film was shown in the Dunsop Village Hall of the project so far and refreshments were served. Photographs of the project were also on display.
Young Leyton is seen here addressing the audience and thanking everyone for attending. Beth is seen here with a senior American Officer. 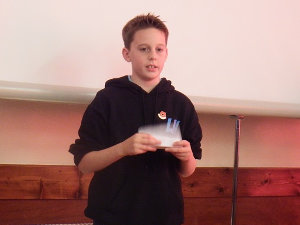 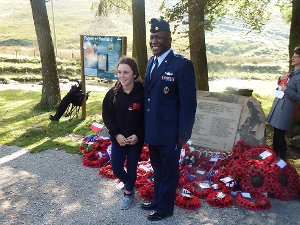 A photo shows Leyton and Dionne with the Heritage Lottery banner. Another photo shows some of the relatives that attended with Michael our piper. 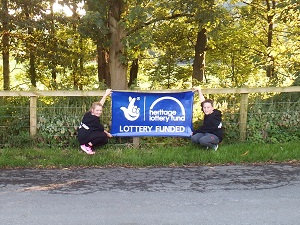 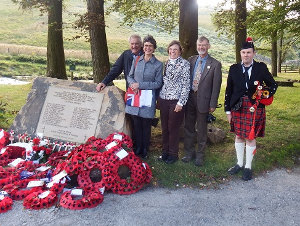 Thanks were given to numerous people but mention must go to Brenda and Marion for their help with the filming of the project, Benjamin Steven for the continued support on the website, Marc Mallam our Architect who did so much to ensure the Memorial Boulder was sited at Sykes Green in face of such opposition from the local AONB officer. Our thanks to the committee members of the Dunsop Village Hall for their support and help and to Puddleducks for the catering. United Utilities of course for allowing us to site the boulder on their land even though it is classed as 'Common Land'. Slaidburn Heritage Archives have kindly agreed to display and look after the Rolls of Honour. Again thanks to the Lancashire Aviation organisation as well as Bowland Rescue, other land owners, organisations and individuals too many to mention here but have been thanked in our film and in the Rolls of Honours created by Norman Kelly and Chris Tattersall.
More information and photographs to follow. Our thanks to everyone involved. More photographs appear on the Clitheroe Youth Forum web site. 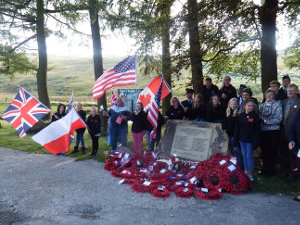 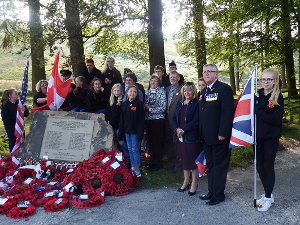