We had our latest dedication service on Sunday 1st March 2015 on the tops of Bleasdale Moor and it snowed like mad. The conditions were bad to say the least. More details in article below.

Thanks to Cliff Ball who kindly supplied these photographs. 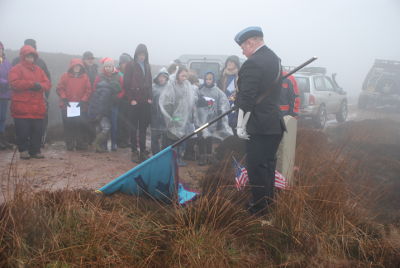 Lowering of the R.A.F.A. Standard. 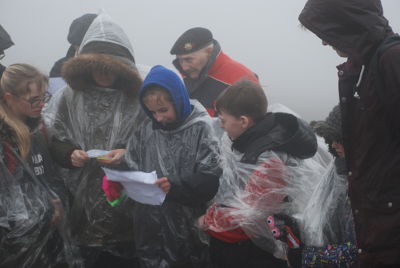 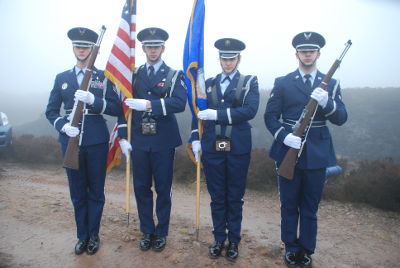 We were particularly fortunate this time in having an Honor Guard provided by the USAF based at RAF Lakenheath, Suffolk. The American Honour Guard were brilliant. Stood like this for ages just in their uniforms.

The Berlin Airlift was one of the first major international crises of the Cold War. Russia was blocking access to the sectors of Berlin under Allied Control. In response, the Western Allies organised the airlift to carry supplies to the people in West Berlin. Aircrews from Allied Air Forces flew over 200,000 flights in one year between June 1948 and May, 1949 providing necessities such as fuel and food, to the population of West Berlin.

On the 7th January, 1949 one of the aircraft involved in the Airlift, a USAAF Skymaster C-54 aircraft took off from the American Rhein Main Air Force Base in Germany on route to Burtonwood Air Base in Lancashire laden with aircraft engines due for much needed servicing. What should have been a routine flight ended in tragedy as the aircraft encountered poor weather conditions over the North of England. In low cloud and heavy rain it drifted from its intended course, ending up over the high ground of the Trough of Bowland. The aircraft flew into the face of Stake House Fell and the four crew members and two passengers were killed. They were 1st Lieutenant R M Wurgel, 1st Lieutenant L A Wheaton, Sergeant B J Watkinson, Corporal N H Thesis, Captain W A Rathgeber and Private R E Stone.

On Sunday 1st March, in appalling weather conditions reminiscent of those experienced by the doomed aircraft, the Clitheroe Youth Forum commemorated these airmen in a Service of Remembrance held on Bleasdale Moor. The Service was attended by Trevor Riley, Standard Bearer representing the Royal Air Force Veterans Association, Ted Davidson, a veteran of WWII who served in the Scots Guards, members of the Clitheroe Youth Forum, and members of the local farming community. The US Air Force provided an Honor Guard who travelled all the way up from RAF Lakenheath, Suffolk. The Service was led by the Reverend Steve Cooper, Vicar of Bleasdale and Richard Clark played the Last Post and Reveille. During the Service a Memorial Stone was unveiled recording the USAAF airmen and four others who were killed during WWII in separate accidents in the area. They are Flight Sergeant D L Edmonds and Flight Sergeant J C Stones RAF pilots who crashed on Bleasdale Moor on 9th April, 1944 flying a Bristol Blenheim, Flight Officer C W Haythornthwaite, an RAF pilot who crashed on Longridge Fell on 17th August, 1944 flying a Mustang and Sergeant R Zywicki, a Polish pilot flying with the RAF who crashed on Inglewhite on 15th April, 1945 flying a Mustang.

This is the fourth Memorial Stone erected by the Clitheroe Youth Forum commemorating airmen killed during WWII and the Berlin Airlift. Thanks go to Jeremy Duckworth on whose land the Memorial stone is sited, to the Lancashire Aviation Investigation Team for their continued support, and to those who provided rough terrain vehicles.

The stone is sited next to a public path and accessible for everyone to easily view. As previously recorded in the Clitheroe Advertiser a main Memorial boulder will be sited at Langden Brook for all 25 airmen lost in the Ribble Valley and Trough of Bowland. This should take place in early July, 2015.

Should anyone require any further information on this project they are welcome to contact Mel Diack MBE Tel 01254823012.

We have been given formal planning permission for the Memorial Boulder at Langden Brook near Dunsop from the local planning authority the Ribble Valley Borough Council and now need to wait for permission from the Secretary of State.

We appreciate the help and support given by United Utilities as this Memorial will be on land that they own.

There was an article in the Lancashire Telegraph on 25th January 2015.

This article appeared in the Australian press today. Stanthorpe is southwest of Brizbane, Queensland.

Remember your browser can enlarge with Ctrl +  to see small print. Reset with Ctrl 0 . 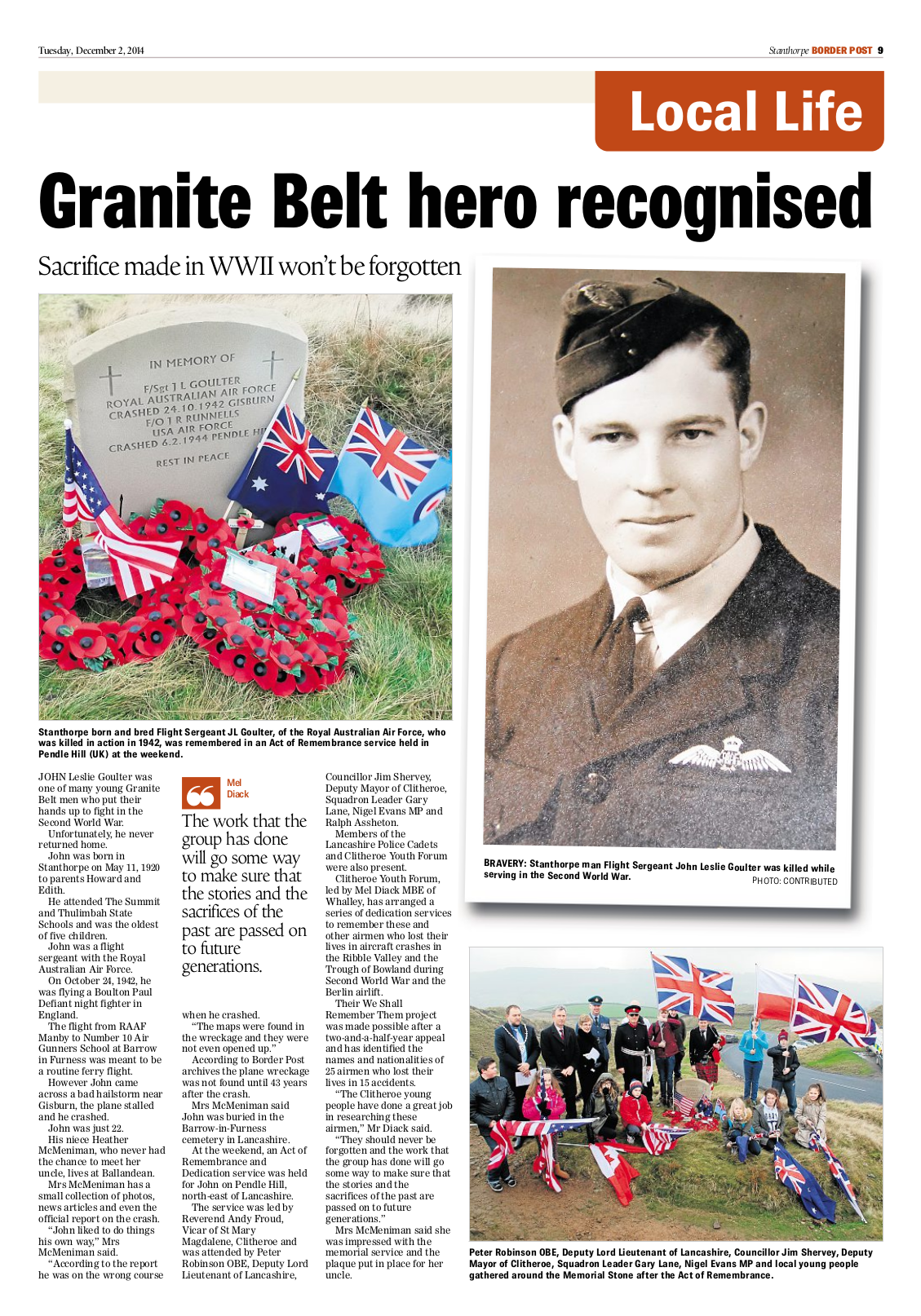 Several photographs from the Remembrance Services on Holdron Castle, Pendle Hill and Salter Fell.  The Deputy Lord Lieutenant Peter Robinson is amongst several of the flags held by youth members on Pendle Hill. The last photo is on Salter Fell showing a number of Polish representatives who attended. 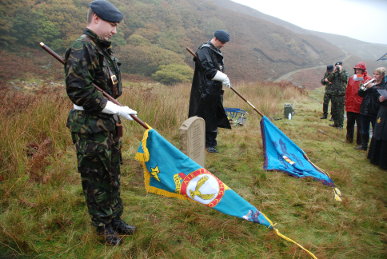 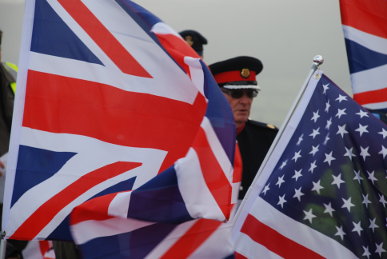 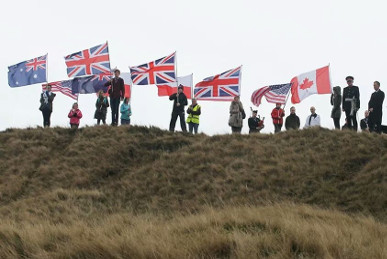 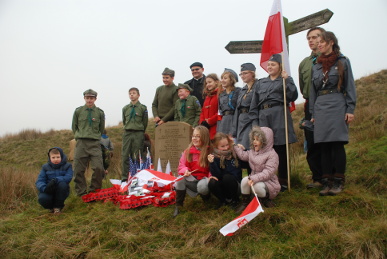