On Saturday 20th June Clitheroe Youth Forum held two dedication services at Burn Fell to remember four American Airmen killed when their Consolidated B 24J plane crashed on the 2nd January 1945. They were part of Unit 715 BS, 448th Bomber Group. USAAF.
The Airmen who lost their lives and were specifically remembered were-
1st Lt J E Fields
2nd Lt O O Casto
S/SgtE E Lyon
T/Sgt P Massagatti.
15 other Airmen survived so this accident could have been far worse.
Then after a brief break for refreshments at Hay Farm Cottage the youth members and local community members moved along to Burn Fell Farm for the second service to remember the above Airmen but also four other pilots who all crashed close by on Dunsop Fell.
Those remembered were
Sgt W R Coveney Pilot Instructor British Airman and J M Gilmer New Zealand Pilot who crashed flying an Armstrong Whitworth Whitley on the 30th April 1940.
Pilot T Nawrocki flying a Supermarine Spitfire crashed on 16th July 1942.
1st Lt H L Perry USAAF flying a Lockheed P 38G and crashed on the 26th January 1943. Part of 83RF FS. 78th Flying Group.
Our thanks for their help go to Steve, Stewart and Sue Hartley, Jeff and Pat Garnet. Our Bugler Richard Clark, Standard bearer Kevin Cheetham and veteran Ted Davidson. Kevin carried his heavy standard all the way up and down Burn Fell and would not accept any help with this. Special mention must go again to the Rev'nd Andy Froud and piper Michael Lonsdale.
The weather was poor to say the least.
Two special guests were Major Nicole Nicholson a USA Marine based in Lincoln and Wing Commander R Henderson from Spadeadam.
Members of the local community came to support such as Slaidburn Parish Council, Slaidburn Archive, Brennand Endowed School, W.I, Silver Band and Young Farmers.
Three residents were filmed for our project having been taken to the crash site when children and more to follow on this.
Our thanks also go to Cliff Ball for his work on the Burn Fell services and arranging the music for the singing of the American National Anthem.
The following photo's show some aspects of the two services. The day started with County Councillor Ian Brown coming down to Henthorn to see the youth members off and is seen here shaking hands with our vice Chair Kendal Kelly.
The second photo shows everyone about to set off up Burn Fell and then moving off into the clouds. Other photo's show the service on the tops and the dedication stone and then the second service in the Burn Fell Farm.

Refreshments after the services were taken at the Hark to Bounty, Slaidburn. 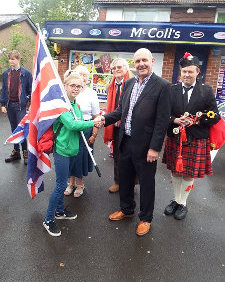 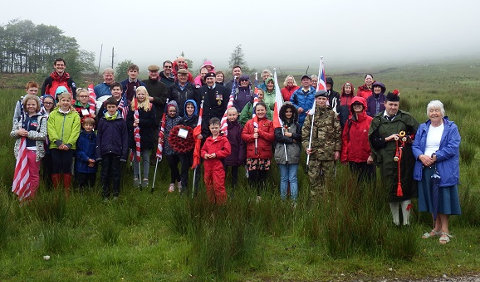 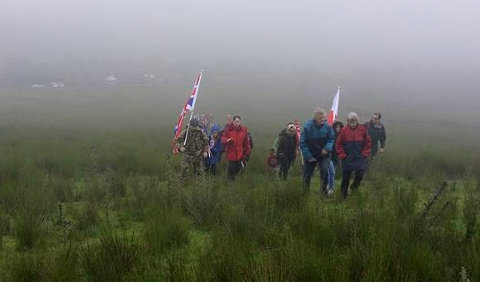 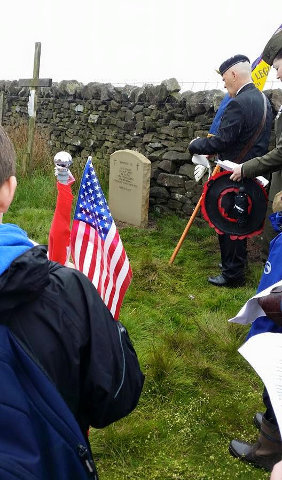 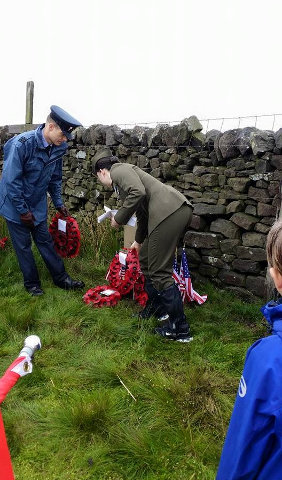 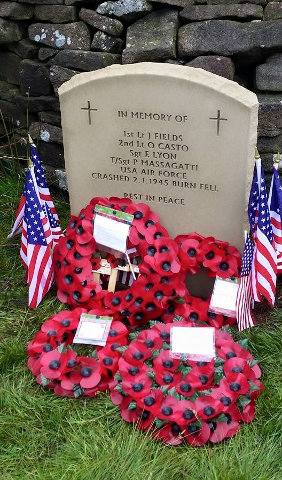 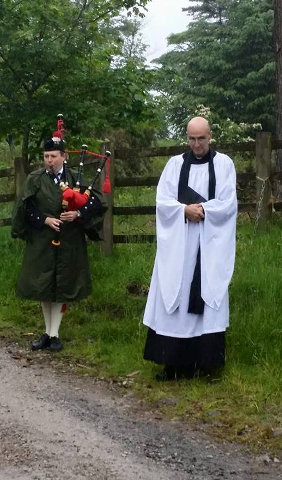 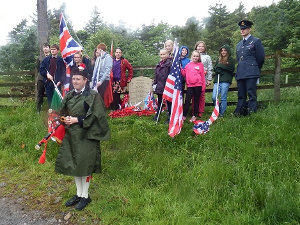 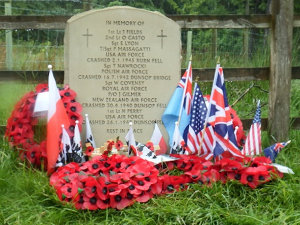 More photographs are on the Clitheroe Youth Forum site - see Links in Menu.

We would like to add a special mention to our Piper Michael who has been brilliant at most of our services when available. This is a photo of Michael. 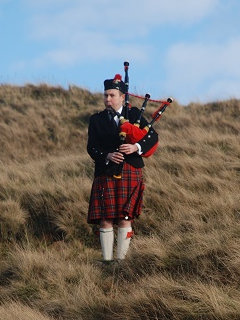 Recently we have gained some more informtion on this crash. The crash details. One of the 14 survivors was Lt Crandall who was meant to be flying the plane. His daughter has been in contact and she tells us that her Dad always felt awful about surviving and four killed. However he and 14 others made it out of the plane. This is a photograph of Lt Crandall. 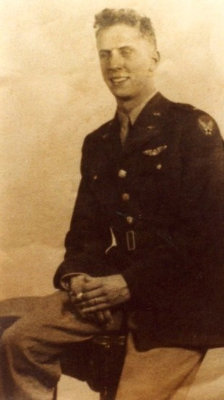 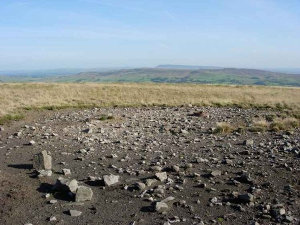 The second photo shows the scorched earth on the top of Burn Fell which has never recovered from the actual crash.

We have obtained a photograph of the headstone of Staff Sergeant E E Lyon who was one of the four killed in the crash and buried in Cambridge Military Cemetery. This has been added to his Casualties page along with additional military details.

We are delighted to announce that the Secretary of State has recently given us permission to place our Memorial boulder at Sykes Green, Langden Brook near Dunsop and gone with the plans that were submitted and approved by the Ribble Valley Borough Council prior to Christmas.

We are making plans to unveil our Memorial on Saturday 19th September 2015 commencing at 1pm.

After the service a celebration function will take place to thank those who have helped. Our thanks go again to United Utilities with regard to this area of land which they own even though it is classified as 'Common Land'.

The Heritage Lottery have agreed to extend the project again until the end of September. 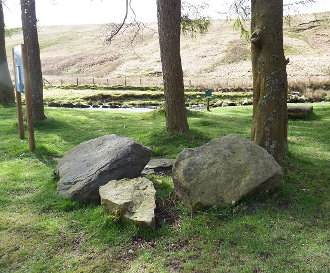 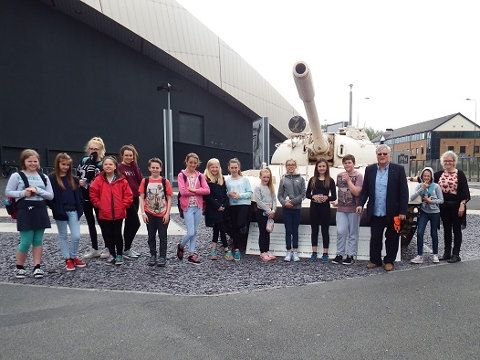 We were wishing to film Mr A G Smith a former World War Two fighter pilot living in the Ribble Valley and now in his nineties, who isn't in good health but has sent us a few comments. We thank him for these.
"I have to say that the real RAF Heroes in my opinion were the Bomber Command crews, who night after night endured such terrible atrocities in the skies above Germany."
"I was trained as a fighter pilot in South Africa and later flew  later on active service with 2 RAF Squadrons in the Middle East."
He wishes us well with our project and thanks us in remembering these Airmen and that the youth of today are all our futures.
"May they not forget the lessons of the past".